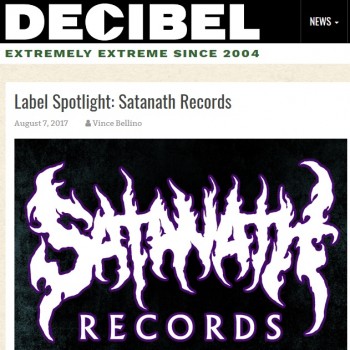 Decibel - famous and biggest metal music magazine. We gave interview for them. Some words about our work you can find here.

Russian label Satanath Records was established in June of 2012 and in the short time since, has amassed a catalogue that contains almost 179 records in addition to over 100 through sub-label Symbol of Domination Prod. Decibel caught up with Satanath owner Aleksey K. to get to know the prolific label better.

Aleksey realized he could start a record label after he printed cover art for a friend. Shortly after, he released his own music.

“That was the moment when I decided to start a label,” he says. “At the beginning I wanted to release only my own and my friends music, as most of the new labels. I printed my first demo and then a few other releases.”

Those “few other releases” went on to become Satanath’s rapidly expanding catalogue, which is now at release 179, Mouldered’s Chronology of a Rotten Mind. When asked how he manages to keep up such an intense release schedule, Aleksey says that he simply loves all forms of metal music. While he notices that some bands don’t want to be on a label with others that don’t sound like him, Aleksey keeps it simple: “All metal genres [are] welcome in our satanic horror house.”

Record labels aren’t run with love for the music alone, though, and Aleksey says the toughest part of running a label is the financial end of it. It takes time to see noticeable profits, but he has an optimistic view of Satanath’s future.

“Maybe after 10 years I will be more famous and bigger than Nuclear Blast, and we will offer to bands personal tanks and first class hotels,” he jokes. “Satan only knows!”

“It’s not a very high paying job, and I could work on other profession, but I don’t want,” Aleksey adds. “It’s special style of life, not just hobby. I put my soul and part of myself into each release, and the memory of this will remain forever and after we die.”

We end the interview on a bright note: as long as humanity survives, so will Satanath.

“Thanks for interview and to all who support our label!” Aleksey says. “Fuck religion, politics and other scum, humanity will survive, I hope, and our CDs will lay as a rare relic in some compartment of an intergalactic spaceship…”