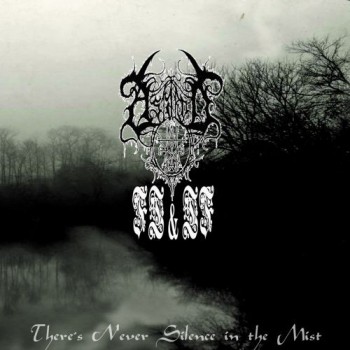 Split "There's never silence in the mist" from 2 mexican black metal maniacs "Astarot" and "From The Torrent & The Fountain" leaves on 30/11.

The new split is a collaboration of black art and worship to nature and melancholy. The idea births as the fact of make a split of two mexican bands with same ideologies and not so different music stands, but different ways to manifest their ideas, and both of the bands are one-man projects. So "There's never silence in the mist" is a melancholy black metal work with high quality and great music that passed through: Unfortune, madness, sadness, nature glorification and epic tales.

The split begins on the side of ASTAROT with "There's Never Silence In The Mist" a dark ambient song that introduce you in the recording so deep that prepares you to the whole wave of the split and to the next track "Unfortunate Moment". This song develops slow at the beginning, but becomes faster and raw with master vocals that permeates the whole ambiance with a feeling of loss and desperation. The music is superb, great keyboard duties and terrific guitars. It's a very good way to start the split. The next one is an instrumental song "Untitled" is the most melancholic track in the split. Piano rules the song and with black metal accompaniment drags you to deepest negative feelings, but melancholy encompasses everything, the song ends as starts: drowning. Astarot with nine records in their discography listed as one of the main references of atmospheric black metal in Mexico.

The second part of the split belongs to FROM THE TORRENT & THE FOUNTAIN (FT&TF) that will wake you up from deep sleep in which you has been interned by Astarot. "And The River Flows" is a song that will take the listener to the coldest forest to join him in a celebration of life and death with a glorious anthem to the river that still flows no matter what. Great black metal song with evident elaborated guitars still with an emotion of joyful sadness and Cascadian influence. The song that ends the split is called "Embracing the Absence" an epic eighteen minutes song, but is not eighteen minutes of ambiance or long silence passages are eighteen minutes of music, of pure desperation and sorrow. Once it starts you cannot stop it, a melody of doom and grief. Great vocals and black metal riffs, with a surprising ending. The split could not finish better. "Embracing the Absence" is beautiful, is a true manifestation of madness, loss, inner shadows and demons. The end of this song it's a true piece of art.

Astarot beginning in 2009, founded by Gonzalo GB "Astarot" in Irapuato; Guanajuato, Mexico. Nostalgia, melancholy, nature and astral themes are the main theme of inspiration. Astarot (Astor, Astoret) goddess plant fertility, hence the name was inspired, not be confused with Astaroth. In mid-2012 "Tortured" joins to session on vocals and lyrics.

FT&TF is a melancholic Black Metal band from Mexico formed in half 2011. Paria Rahu ex Godhead's Lament (Bass & Vocals) ex Katharma (Drums) is the only member. The idea of the project births after these bands split-up. The lyrical and music themes are death, night, ancient & epic tales, madness and nature.

You can find other information about musicians on: