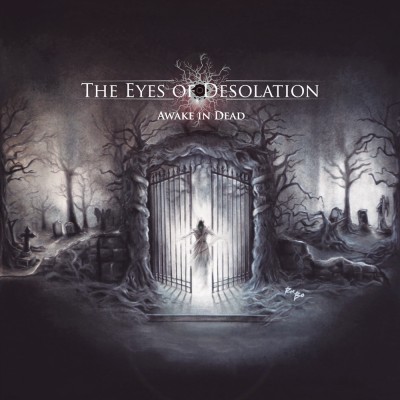 Clean  playing  starts off  the ep  and  after  a  few  seconds  atmospheric  keyboards  make  their  presence  known  on  the  recording  along  with  the  music getting  heavier  and  also  adding  in  death  metal  growls  along  with  some  screams  that  are  very  heavily  influenced  by  black  metal  and  after  awhile the  music  starts  bring  in  more  of  a  goth  metal  style.

The  Eyes  Of  Desolation  plays  a  musical  style  that  takes  a  90's  style  of  goth  metal  while  mixing  it  in  with  more  modern  post  metal  and elements  of  black,  death  and  doom  metal  to create  something  very  original,  the  production  sounds  very  professional  while  the  lyrics  cover  dark and  depressive  themes.

You know, I am not sure what really stuck with me and got me to listen (much) longer than I usually do when doing selections for the review and news lists. It must be this darkly threatening mix of Gothic Metal with Progressive trends and elements thrown all over their tune. With enough dissonance to keep you on your toes and awake (well, no pun intended…). Add some crunchy #metal ice-cubes into this Mojito in front of you and ready is your desolate cocktail for the evening.

The Eyes of Desolation just unleashed their newest EP Awake in Dead signed to Symbol of Domination Production (EU) and Cavan Records (CR) onto the unsuspecting world this early 2016. Somewhat eerily reminiscent of Moonspell in a way with a pinch of Todtgelichter, but disturbingly darker, it will work itself under your skin and stick to you like glue. And it’s got these traditional softer attributes to Gothic Metal too sometimes, the vocal delivery reminding me of Blutengel in a way, albeit not as electronic as the latter.

The variety they bring to the table is also their strength: The band delivers from #metal tough to – well – dreamy, almost ballad-like. Just to take to screeching at you at no moment’s notice, always in their somewhat low to mid-tempo delivery. The EP was produced by Isak Arroyo and all recording, editing, mixing and mastering done at Cavan Studio in Heredia.

The Eyes of Desolation actually hail from Costa Rica – not really known as a haven for Gothic Metal in general – and messing with #metal since 2008. They already released a first album in 2013 called Songs for Desolated Hearts.

If you ain’t got it, get it. It will be worth your money.

In today's "post"-craze it's no surprise that new ideas and new versions of metal are starting to appear. We've had post-hardcore, post-metal, post-black metal and post-whatnot, so it was only a matter of time before the gothic side of the metal spectrum would receive a "post"-prefix. So what exactly is post-gothic metal? Well, it's gothic metal with hints of black metal and loads of immersive passages.

The Eyes Of Desolation hail from Heredia, Costa Rica, perhaps not really a country you'd expect to produce such a dark and atmospheric sound. However, somehow, this very modern blend of symphonic metal, doom and gothic rock is quite contagious. While I had a few careful doubts in opener 'Waking Death', 'Crimson Sky' certainly convinced me of this band's quality. Uptempo gothic rock with flashes of industrial and loads of doomed out sounds.

Why doubts? Well, this band was described as recommended if you like Moonspell, Tiamat and Paradise Lost. In a way, that's completely true. The music certainly moves into that direction but it's heavier, often with quite brutal vocals. Nonetheless, like I said, I'm convinced that this is an excellent ep, especially that last anthem, 'Fighting For Your Cause'. That song is a stunning epos of dark, almost droning music, gloomy vocals, awesome synths and a brilliant guitar solo.

So yeah, this is good stuff for those dark souls out there. As often, I now hope that these guys will soon come over to Europe and pour their darkness over our festivals and venues. Go ahead, check it out while I once again bask in this awesome ep...

Anspieltipps: Crimson Sky, Fighting For Your Cause

This quintet appropriately known as The Eyes Of Desolation play gothic metal, with plenty of melancholic guitar harmonies and dreadful vocal passages, which will make you look deep within yourself in search of truth.

“Awake In Dead” has plenty of influences from Katatonia, Type O Negative, My Dying Bride and The Sisters Of Mercy, with their amplified vocal and guitar driven gothic darkness. There are only four songs on this ep, but with 20 minutes of music, there’s enough darkness and sadness to fill your world to the top. There is no escaping The Eyes Of Desolation’s soul penetrating misery, and it’s something you’re bound to feel deep within your mind and soul.

“Crimson Sky” is the only track, which borders on melodic gothic metal and death metal, and it’s sure to alleviate all of your self-inflicting depression with just one listen.

The haunting clean, at times choir inspired crooning is so damn chilling, you’ll feel like as if you’re trapped in some fucking mental asylum you’ve created in your drug induced, fucked up mind. The four tracks on this album will totally rape your spirit in the name of the horned god standing at the pits of eternal damnation and suffering.

Personally, I’ll be listening to The Eyes Of Desolation during a violent lighting and thunderstorm on a hellish rainy night. At the end of the day, I am dying for an insane and chilling nightmare like “Awake In Dead”.

Costa Rica's The Eyes Of Desolation seek to be in the same vein as many of your favorite doom/death acts (Swallow The Sun, Daylight Dies) but they still have a bit of work ahead of them. This EP comes three years after the release of their debut, Songs For Desolated Hearts and shows the band more or less continuing with the same lineup they had on the previous recording. Dreary riffs, twinkly keyboards and sullen melodies make up this act, which actually does contain a rather potent backing growl as well as a pleasing vocal performance from frontman Carlomagno Varela who seems to have Peter Steele firmly in his heart. He still needs a little bit of work, but with time and practice he could definitely become something. The mix of scowls and gravel in the harsh vocal segments of “Crimson Sky” certainly give the song some staying power, in addition to Carlos Carazo's memorable keys. They have the right idea but there's some polishing needed here and I really want to be be to appreciate this act more in the future.

I'd actually still recommend the EP as you'll definitely find a few memorable cuts on the one I mentioned as well as “I Found My Place” which proves that The Eyes Of Desolation are a noteworthy act. “Fighting For Your Cause” was a bit too Goth-Pop, but I'm sure that there are people who'll dig it. Whatever the case, I'd hope that these guys continue and I'd certainly love to hear more from them in the future. While still a bit rough, this EP proves that these gentlemen have the right idea and I'll be keeping my eye on them.

For right now, it's a decent album. But that's okay, because it feels like a fresh start from an act with it's fingers firmly planted in right direction. I'm not sure what the LP sounded like, but this EP certainly has promise and potential. Goth metal fans are encouraged to give it a listen.

On this album it can be heard the influence of melodic,atmospheric and rock music that gothic sound needs to have in it, these influences, and it is ideally fitted with the hole album. The vocals are awesome, pure gothic vocals, and unclean vocals too, pure rawness and darkness in it. Solos on the album are awesome too, they have this rock vibe to it.

Tehnical compliance is brought to ideal, acoustic is great, production is awesome. This album will take you to a place of death, darkness, coldness, sadness, lonliness.

The Eyes Of Deslolation is anonymos band that desirves a lot of attention of public and listeners. This band is a amazing and unigue gothic metal band, with awesome gothic music, in the most best way.

And lest you think from that last offering that we have any sort of weird grudge against Costa Rica, we now come to The Eyes of Desolation, a sort of gothic metalcore act (self-classified as “dark/gothic metal”) that crosses metalcore/emo screams (which alternate with Fernando Ribiero-esque baritone croons) with a musical approach that melds Moonspell and H-I-M with strong elements of bands like AFI, Atreyu and All That Remains.

Basically, take the uptempo, heavily emo feel of, say, the soundtrack to a CW tweeny drama and bring it to a more particularly “gothic” aesthetic. It’s a million miles removed from goth proper, and is about as far from the female fronted “gothic/symphonic” more generally encompassed by that designation.

Instead, it’s more along the lines of Vile Valo and his heartagram, Ribiero’s long running Portugese act and the sort of gothic doom the UK and Canada seem to specialize in (anything from My Silent Wake, Paradise Lost and My Dying Bride to Sleep of Monsters and The Drowning).

That said, it’s hardly a bad thing to say that Eyes of Desolation manage, by introducing these unfamiliar elements to what amounts from its similarly oriented touchpoints to being a reasonably standardized gothic doom affair, to infuse new life into said template.

While coming closest to Opium-era Moonspell gone H-I-M, there’s a youth and vibrancy in play here that seems less out of place at a darkly inclined high school hangout (think anything from a goth/emo run prom to Hot Topic here) than any of the aforementioned “gothic doom” acts ever would.

And while that may sound like an especially backhanded sort of a compliment, rest assured: I enjoyed this one.

On this album it can be heard the influence of melodic,atmospheric and rock music that gothic sound needs to have in it, these influences, and it is ideally fitted with the hole album. The vocals are awesome, pure gothic vocals, and unclean vocals too, pure rawness and darkness in it. Solos on the album are awesome too, they have this rock vibe to it.

Tehnical compliance is brought to ideal, acoustic is great, production is awesome. This album will take you to a place of death, darkness, coldness, sadness, lonliness.

The Eyes Of Deslolation is anonymos band that desirves a lot of attention of public and listeners. This band is a amazing and unigue gothic metal band, with awesome gothic music, in the most best way.