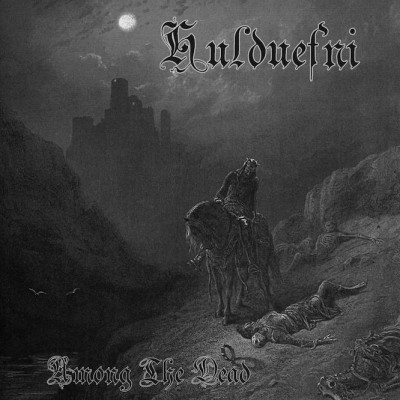 Hulduefni are a solo project from Portugal that plays a mixture of dark ambient, drone, experimental and psychedelia and this is a review of his 2013 compilation album "Among The Dead" which was released as a joint effort between Satanath Records, Dead Dog Skull and Hiel Hell Productions.

Ambient sounds start off the album and guitars can also be heard quite a bit throughout the recording and they also bring in a lot of melodies and leads and nature sounds can also be heard at times and a lot of the tracks are very long and epic in length and as the album progresses elements of noise are added into the music.

All of the music is instrumental and the music can also be very avant garde and experimental at times and when synths are added onto the recording they give the music more of a haunting feeling along with some programmed beats and some songs also bring in elements of electronic music and the music also brings in the feeling of an 80's Nintendo or Sega game at times while later tracks bring in more drone and psychedelic elements.

On this recording Hulduefni plays a style of dark ambient that is very diverse with some songs being guitar orientated while others focus more on electronic sounds and you can also hear a great amount of drone elements throughout the recording along with every track being all instrumental and the production sounds very dark.

In my opinion this is another great sounding recording from Hulduefni and if you are a fan of dark ambient and drone, you should check out this album. RECOMMENDED TRACKS INCLUDE "Doom" "The Dracula's Castle/Dracula's Curse" "Alien Encounter" and "Losing My Mind".