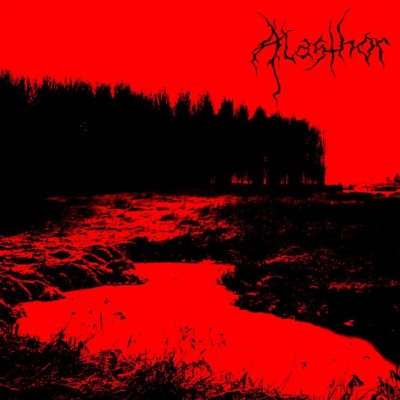 Alasthor are a band from Mexico that plays a mixture of black and doom metal and this is a review of their self titled 2013 ep which was released by Satanath Records.

A very dark and atmospheric synth sound starts off the ep and after the intro the heavy and atmospheric starts start to mix them along with some grim black metal screams and the slower sections of the songs mix in a great amount of doom metal elements and the music is also very heavily rooted in the early 90's.

Clean playing can be heard in certain sections of the recording along with a small amount of spoken word parts and there is also a brief use of death metal growls and when the music speeds up it brings in more of a raw and depressive style of black metal along with a small amount of blast beats while the riffing also adds melodies onto some of the tracks and they close the ep with a cover of Burzum's "Lost Wisdom".

Alasthor plays a musical style that takes the 90's and depressive styles of black metal and mixes it with doom metal to create a sound of their own, the production sounds very dark, raw and old school while the lyrics cover death, negativity, and grief themes.

In my opinion Alasthor are a very great sounding mixture of black and doom metal and if you are a fan of those musical genres, you should check out this band. RECOMMENDED TRACKS INCLUDE "Cult of the Dead" and "Into the Depths Of The Universe".

Looking for more soundtracks to your moonlight drives across fog-laden mountain passes? Mexico's Alasthor has something you might be interested in, especially if you have a nostalgic soft spot for the early albums by Hecate Enthroned and Dimmu Borgir. You'll know within twenty seconds of the first full song, 'Cult of the Dead', how you feel about this demo. The recording has a distant cave-like resonance, which aptly suits its Black Metal content - dressed up in pretty keyboards, but with raw core intact.

This is a lean EP: three songs, an intro and an outro, and a bonus Burzum cover. It's basic nice'n'evil Black Metal that calls to mind the time in the 90s when Black Metal was starting to become symphonic, mainly by use of simple synth pads overtop a foundation of rock power chords, quarter-note guitar leads, and serviceable, propulsive drumming. While the bulk of the guitar and drums are loosely but recognizably in the Venom and Hellhammer vein, there's some nice variation included with arpeggio breaks creating some breathing room between heavier sections. Keyboards remain constant, just pressing and holding their assigned chords until the next change. Vocals are mostly the expected Black Metal howl, but occasionally turn up the heat for downright beastly roar at times.

The third song, 'In the Depths of the Universe', is somewhat ambitious and dynamic, the album's real centerpiece. Though there's really not much difference between any of the three songs. Myself, I like this quite a bit: it's a darkly charming throwback to 1994-1996, when (some) Black Metal had found its way into accessible pastures, but the gross commercial spike was still a few years away. Certainly, Alasthor's EP won't make a splash in this decade. But it is most definitely a fun, frosty romp through haunted forests fondly remembered.